If you are an experienced practitioner or one who has read some literature on the subject, probably you have the experience or vicarious experience to know that chi kung practice can result in a student able to lift up a heavy object. An object of such heaviness that the student can't possibly lift with such ease by looking at his outer physique. Is he playing magic? Is the power of chi that allows him to lift such object up with ease? He himself may not know the answer. Without a good explanation, it will not be a surprise that people will cast a skeptical eye upon chi kung - are those guys cheating?

Chi kung is a form of internal mind-body art. It trains directly the internals of a practitioner's body. Going to the gym (or for that matter any regular sport) is an external physical art. It trains the externals and which then will filter into the internal, but without the practitioner having a conscious control of the filtering process. An internal practitioner on the other hand can, if he does himself correctly, consciously control and therefore train his internal part. The strength of an external artist can be seen from his outward appearance, while the strength of an internal artist cannot be seen from his outward appearance. Of course, the best young practitioner can be trained in both disciplines. A middle-aged student however is advised to train himself solely on the internal art only.

Look at a crane. It is a steel structure that can move heavy objects around. In the internal art, the training method is to directly train the internal muscle-cum-bone structure, like tightening and strengthening the connecting joints of the structure of the crane.

The logic is simple (and therefore can be understood by seasoned practitioners who are reading this post). The most important joints are our shoulder and pelvic joints. To tighten the joints, we rotate it in one direction with connectedness (as perceived by internal chi-flow) and then rotate it in the opposite direction with connectedness (sometimes with different focus, like one in shoulder the opposite in wrist), and stop there! Your joints will be locked. You can then start strengthening (and tightening) your joints using stationery zhan zhuang form, like "holding golden urn". After such training you can start with slow sluggish movements to "test" your connectedness and strength during motion. In Master Wang Xiangzai's logo, it is called "testing Li" 試力, literally meaning testing the continuity of strength and tightness in your joints during movement.

In "Holding golden urn", a student doesn't just hold the stance without prior preparations. He has to turn his shoulder joints one direction and then turn back the opposite direction and fix it there to achieve the required chi. He should then do the same for his hip joints. I didn't see any sifu talking about 24 styles tai chi nei gung explain this training method. I have no idea why. Recently I browsed some Japanese books on "traditional martial arts". They don't have 24 styles, but they have their systems of joint-tightening training - and they explain it so clearly without hiding the technique of the art. So, my dear advanced readers who know the art - don't blame me for disclosing any secret of yours - it has already been there in Japanese texts, and for so many years. Why should anybody hide? 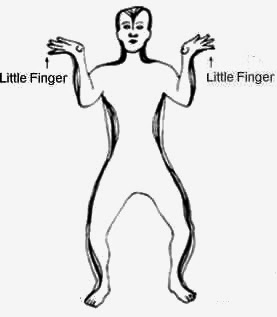 View articles according to topic

Paul
Hong Kong, China
Standing precariously between Eastern and Western culture, trying not to fall into either Abyss! Interested in everything that is challenging intellectually. Aware of the need to be physically and mentally sound, therefore a keen practitioner of tai-chi chi-kung, Zen meditation and Taoist yoga. Able to converse fluently with both Shamans and scientists. Love to demystify rather than mystify.